No matter which region you’re in, Virginia has an impressive culinary scene, with dozens of notable chefs creating inspired dishes from locally sourced ingredients that bring the best flavors of the Commonwealth together in uniquely delicious ways. To shine a spotlight on the best eats in Virginia, we talked with a few of these chefs, from the award-winning seasoned professionals to the rising stars that have garnered attention in national and even international publications. Follow our “Inside the Kitchen” series as we take a look at all there is to Eat.Drink.LOVE in Virginia! 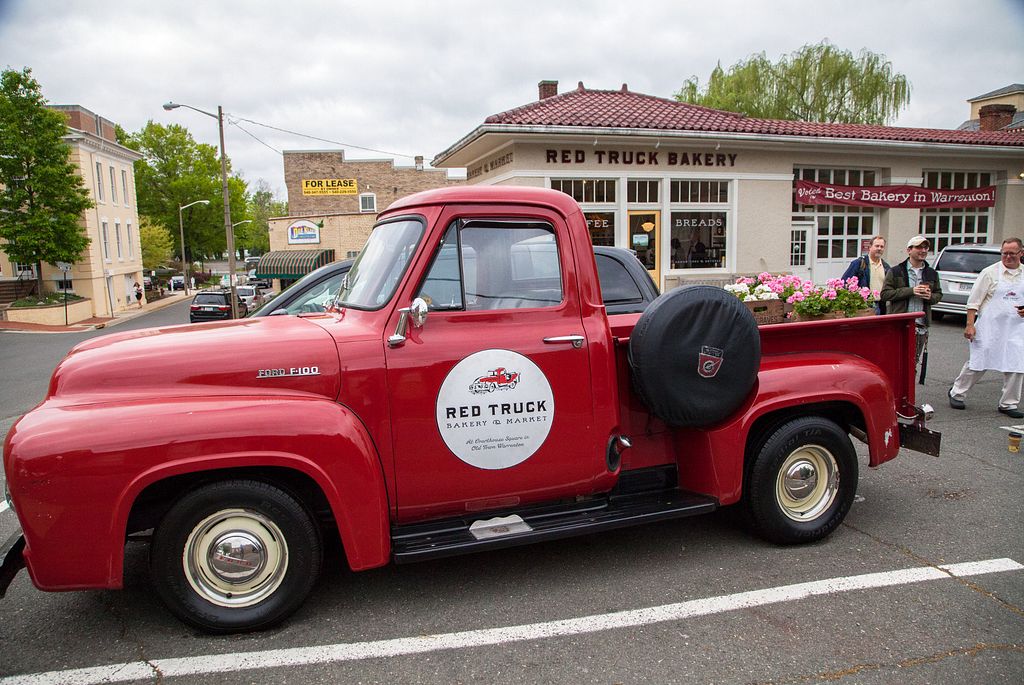 Red Truck Bakery began in a rural farmhouse building about an hour west of Washington, D.C. in the famed Shenandoah Valley. Over the years, the bakery has quickly grown in reputation, earning accolades from the New York Times, Southern Living, and the Washingtonian. In addition to media recognition, the bakery is also beloved by notable celebrities like Oprah and former President Barack Obama, who fell in love with the bakery’s pecan pie. Joining the original Marshall location, a second Red Truck Bakery opened in Warrenton, and the bakery also carries a selection of pies, cakes, and baked goods online, shipping to customers all over the United States.

Chef and owner Brian Noyes is the former art director for national publications like The Washington Post, Smithsonian, and House & Garden. As a hobby, he began making jams on the weekends and selling them at local country stores, branding the jars with his “Red Truck” label named for the classic Ford farm truck Noyes purchased from international fashion designer Tommy Hilfiger. The popularity of his products began to grow beyond county borders, and when Noyes’ products were featured two years in a row in The New York Times, he decided to leave the world of art direction and focus full-time on his cooking career. Today, Chef Noyes remains as busy as ever, constantly creating new recipes for his bakery locations while publishing cookbooks that are must-haves for every aspiring home chef.

Want to know more about Red Truck Bakery and Chef Noyes? Read on to learn about some of his chef secrets followed by one of Chef Noyes’ favorite recipes!

Do you have a few go-to producers, farms, or other purveyors you prefer to get your local ingredients from?

I use pears and much more from Gardiner Lapham’s The Farm at Sunnyside, near Little Washington in Rappahannock County. We also get pears and most other fruits and vegetables through Al Henry and his Jumpin Run Farm in Mount Jackson, Virginia (and if he doesn’t have what we need, he brings it from the Mennonite farming community in Dayton, in the middle of the Shenandoah Valley.

What are your favorite Virginia flavors?

It’s all about apples and pies and caramel (and we throw all that into one great dessert! I’m cooking up apple butter, and now I’m working on a new cookbook and I go in a slightly different direction with winter squash butter.

What is your favorite thing to cook for yourself?

This time of year, it’s pork stews, soups, and especially a mole sauce (that great Mexican sauce with chiles, chocolate, raisins, nuts, and fruit) I learned to make at a former convent in Oaxaca, Mexico, with chef Rick Bayless. Mole with chicken thighs, and squash enchiladas with mole sauce.

What Virginia wine, craft beer, cider, or cocktail would you pair with that?

I’m not a beer guy, but I think a hard cider would be great, especially if mixed with a little bourbon.

What is your favorite vacation spot in Virginia?

I live in Arlington, have two bakeries in Fauquier County, and for me a vacation is driving 15 minutes further to my farmhouse in Orlean—especially if I don’t have to mow the field.

Otherwise, I like to travel the Shenandoah Valley (staying off of I-66), and eat at Ian Boden’s The Shack in Staunton, River and Rail in Roanoke, and whatever little dive looks good as I head south towards Abingdon.

“I love gingerbread, and although we bake it every winter, I wanted to offer an elevated version for holiday entertaining. My friend Gardiner Lapham at the nearby Farm at Sunnyside in Rappahannock County brings me excess pears each fall, and they inspired this recipe. We recommend using a well-greased springform pan to ensure the cake comes out as smoothly as possible. Pieces of pear will inevitably stick to the bottom, but you can easily pop them off the pan with a knife. Comice pears are best for this recipe, though Bartletts and even Asian pears also work well. Make sure they’re not too ripe, as they won’t hold their shape when baked. You’re looking for the fruit to be soft enough that you can push your thumb into it without juice squirting everywhere.”

2. Make the topping; pour the melted butter into the prepared cake pan, tilting it to evenly cover the bottom. Sprinkle the brown sugar and crystallized ginger evenly over the bottom.

3. Holding the pear halves in your palm, slice them lengthwise into 1⁄4-inch-thick slices. Place each half carefully in the pan, rounded-side down, fanning the slices by pressing down. Repeat with each pear half to make a spoke pattern around the pan.

4. Bake for 15 minutes, until the pears look softened and lightly browned.

5. Meanwhile, make the cake: In a small bowl, combine the fresh ginger, orange zest, and granulated sugar and stir with a fork. Let sit for a few minutes to allow the orange and ginger flavors to infuse the sugar.

7. In a separate large bowl, whisk together the eggs, buttermilk, molasses, and canola oil. Add the egg mixture to the flour mixture and stir with a wooden spoon or spatula to combine.

8. When the pears are baked, pour the batter carefully and slowly into the pan over the pears to ensure they maintain their pattern.

9. Bake for 25 to 33 minutes, turning the pan after 15 minutes, until golden brown on top and a toothpick inserted into the center of the cake comes out clean. Let cool in the pan for 15 minutes.

10. Carefully invert the cake onto a large plate or platter and remove the parchment. Let cool completely before slicing and serving.

Looking for more incredibly tasty recipes from Virginia’s top chefs? Stay tuned for more Inside the Kitchen articles and check out these other articles in the chef series: